You Need Only to Be Still 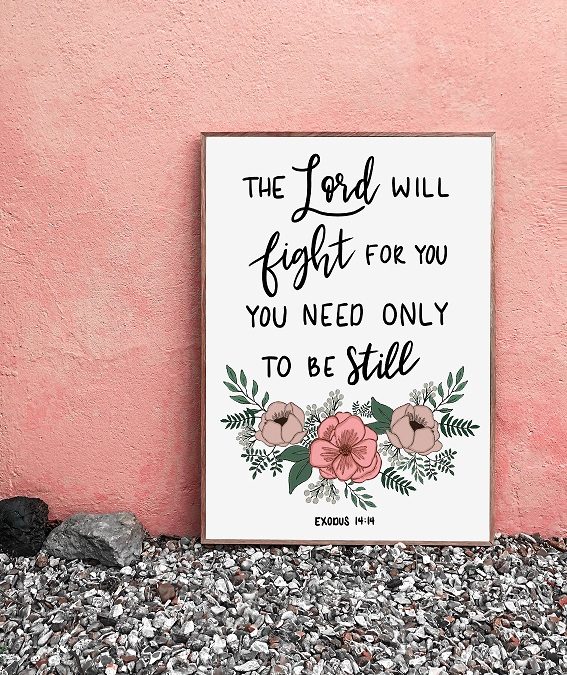 One of my all-time favorite verses is found in Exodus 14. The Israelites are trapped between the Red Sea and the approaching Egyptian army. The people cry out to the Lord in fear and say to Moses: “it would have been better for us to serve the Egyptians than to die in the desert!”

Moses replies: “Do not be afraid. Stand firm and you will see the deliverance the Lord will bring you today. The Egyptians you see today you will never see again. The Lord will fight for you; you need only to be still.”

The chapter then gives the Lord’s reply to Moses and tells us that the angel of God went and stood between the armies of Egypt and Israel. It concludes with the parting of the Red Sea, the devastation of the Egyptian army, and the salvation of Israel.

It’s a story that has been told so many times in media that it’s lost its meaning and magnificence. The Lord literally told His people He’d take care of them, and He proved faithful. They simply had to obey and follow the path the Lord provided.

I love verse 14: “The Lord will fight for you; you need only to be still.” I love it so much that I had a friend design the printable you see at the top of this page. I wrote this verse out on post-its and stuck them to the fridge and my mirror to remind myself that God’s got this. He’s big enough to handle the armies of the enemy, to make a road where there previously was no road, and to deliver His people to safety when it seems all is lost. He is a loving, faithful God.

Be still and know He is God (Psalm 46:10). It’s the stillness that gets me every time. In a side-hustle culture we rarely make time for stillness. It’s a tale as old as time – we get so busy in our own lives that we forget to make God a priority. But it’s also more than that. God can be our number one and we can move at the speed of light at the same time. Stillness is not something that comes automatically because we are saved by His everlasting grace. It is a daily surrender. It is purposeful living, an intentional pursuit of a life that honors Christ.

Stillness is not only taking the things we’re holding onto and laying them at the altar, but also leaving those things there in the hands of Jesus. He’s big enough to handle them. We are not. Don’t pick up what you’ve already surrendered. Don’t rebuild the walls that the Lord has torn down. Don’t fool yourself into thinking you were better off in Egypt.

You need only to be still.

Stillness is confidence in an almighty God and Father. It’s contentment in the life that He has given us because we know He is the ultimate provider for our every need and the Warrior who will fight the battles for us. The Lord will fight for you. The Creator of the universe is fighting for you. Every nudge of the spirit, every convicting word from the pulpit, every note on the Christian radio, every FaceTime with a genuine friend unafraid to call out your bullcrap is the Lord fighting for you. He doesn’t have to, but He wants to. He longs to be in a relationship with His creation and that includes little ol’ you and me.

Will you be still?

I haven’t been very still lately, but I’m re-learning the things I’ve already learned and lost sight of. I’m dropping things at the altar that I’ve previously given to Jesus and then snatched back up. Why am I holding on so tightly to garbage? I am the daughter of The King. I want to abide in a place of stillness where I can hear the Lord speaking to me and I know beyond a doubt that He is fighting for me. I don’t have the energy to fight the battles on my own, and I don’t have to. I’m not sure why I keep trying.

One of the messy bun mantras is “I Am Brave.” Part of bravery is knowing who the battle belongs to and knowing when to step aside and let the God of Angel Armies handle the fight. It doesn’t make me any less Brave; it makes me wise. It makes me obedient. God specifically told us in His Word that we are never alone…why do we act like we are? We don’t need to prove anything to anyone. We don’t need to show God we’re tough; He already knows our hearts. It’s a bigger testament to our faith and God’s glory if we trust Him to be faithful to His promises and provisions.

You need only to be still. Stand firm and see the deliverance the Lord will bring. The problem you see today you will never see again. The Lord will fight for you.