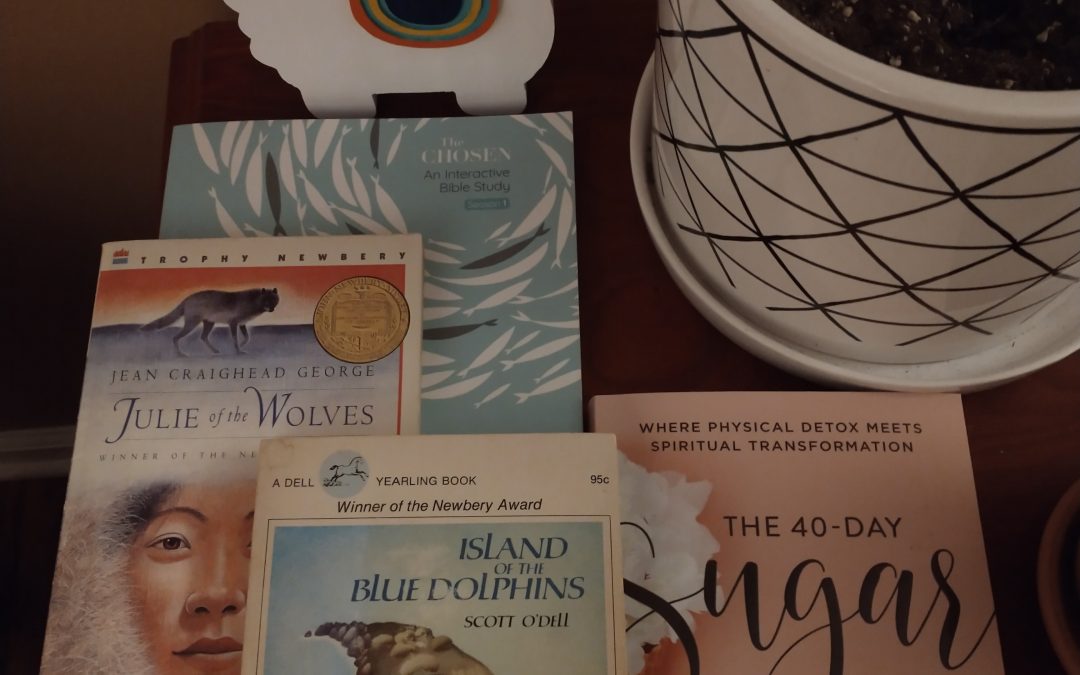 Happy February! We’re currently experiencing a little winter snow-and-ice storm in the great state of Ohio. I spent yesterday evening curled with a couple books and some tea and listening the sound of sleet hitting the window… Today I plan on baking some cookies and maybe lighting a fire and getting the children too hyper on popcorn and hot chocolate. They’ve had two snow days in a row but since I am already a work-from-home gal, I’ve been working the usual hours.

Since January has come and gone without much ado on this blog, and since it’s a cozy day to hunker down with a book, here is a tiny breakdown of what I read the month of January:

What Does It Mean to Be Chosen? by Amanda Jenkins, Dallas Jenkins, & Douglas S. Huffman – this is a faith-and-Bible study companion to the show The Chosen. While I technically started it in December, I finished it in January. I thought it did a great job as a study companion to the show and really brought the message and imagery from the show into practical application. Our small group plans on using the second study guide (published this month) for season two as our group’s upcoming study material.

The 40-Day Sugar Fast by Wendy Speake – if this one sounds familiar it’s because I read it last year for Lent and posted briefly about it on the IG. It’s a 40 day devotional that walks the reader through physical fasting (from sugar mainly, but touches on other things) in order to build a closer relationship with God. This one I started in January and am halfway through. I will blog my candid thoughts on the Fast when it is complete; stay tuned.

Julie of the Wolves by Jean Craighead George – I know everyone was reading this in elementary, but I never read it. I found a copy in a Little Free Library and saved it for a chilly January day. Since it’s a thin read and a YA novel, I read it pretty quickly in one day. I can see why I didn’t read it as a kid since it’s slow-paced, but as an adult I appreciated the narrative pace and the larger messages contained within the story. It’s the first book in a long time that’s actually surprised me with an unforeseen plot twist. I thought it was worth the read.

Island of the Blue Dolphins by Scott O’Dell – Again, another book I never read as a kid. While a similar premise to Julie of the Wolves, instead of being set in the Alaskan wilderness the events unfolded on an island off the coast of California. I give it a lower rating than Julie. The most interesting thing about Island is that it’s loosely based on a real person, who really did live on alone for 20 years on an island and was the last of her tribe. I found the details of the real story through Wikipedia (always reliable…) and thought that was more interesting than the novel itself. I think it would make a better movie and in my unpopular opinion, Hollywood should stop making remakes and look for new source material…just saying.

In preparation of the release of my poetry collection and some other projects in the works, the next several blog posts will jump back to the blog’s origins: Messy Bun Mantras. I’m going to take a quick dive into each chapter and we’ll chat about the mantras of the book. I’m excited to get back into this space and writing consistently again.

As always, thanks for reading! See you on the socials (particularly Goodreads) and back here next week.