I Solemnly Swear I Am Up to No Good 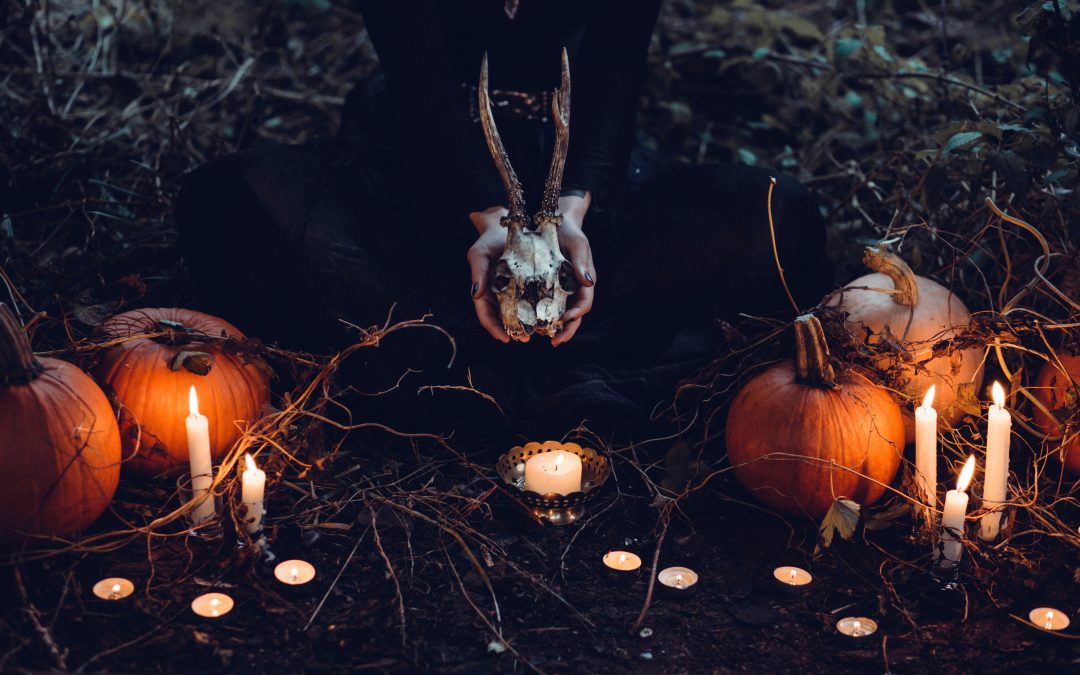 Happy Halloween! Even though Covid has put a damper on this year’s festivities, I still plan on having a fabulous Halloween.

You might be thinking, Meg, aren’t you a Christian? Aren’t you supposed to shun the devil and hate Halloween?

I’m so glad you asked. Grab a popcorn ball and get cozy because we’re about to crash-course through why I love (and hold a healthy respect for) Halloween.

One of my all-time favorite fictional characters is Indiana Jones – just the original three movies, don’t talk to me about the fourth one. I know that those movies (and accompanying book series) are Hollywood’s version of archaeology, but Indiana Jones planted this academic, curious mind in me. I pursue the study of world religions and cultures, past and present. I took religion, mythology, and archaeology classes in college because I believe that knowledge is power. The more we understand about the world and the people in it the better we can relate to one another and learn from our mistakes.

For me personally, studying other religions and comparing them to Christianity affirms my faith. Scientific evidence can only take us so far; obviously there is still that step of faith, that point where you choose to believe. The more I learn about other religions, the more convinced I am that our God is the only God and Jesus is the only way to salvation. I think it’s crucial to know where other people stand on their beliefs because our culture is so saturated with things that sound like Jesus, but really aren’t.

The quick answer, because it’s Halloween.

The long answer: I wasn’t allowed to watch anything scary or magical growing up, so when I got older I kind of ran with that (where are my fellow Gryffindors?). Halloween has always been fascinating to me because it was very taboo in my house, same with magic. So because of this, I didn’t watch Sabrina the Teenaged Witch growing up. I heard Netflix was creating a remake that was dark and edgy, so naturally I gravitated toward that…and deeply regretted it. Please don’t watch this show. It goes further than I was comfortable with, and will ever be comfortable with, and I truly believe that the enemy is working through this show.

I don’t know if you’ve noticed, but witchcraft is on the rise in trends. I did some internet reading about the new Sabrina series which led me down the internet black-hole, and eventually I decided I needed to do a study on Paganism. The whole religion is shrouded in mystery, and we as people tend to either fear or revere things that are shrouded in mystery. I wanted the mystery gone, so I can call baloney on the enemy, and here we are.

One – Direct Line of Descent

Paganism has not continuously existed from the ancient times to the modern, despite how much people might want to claim that it has to provide their practice validity. The rise of monotheism – Judaism – essentially wiped out polytheistic beliefs. After the declaration of Christianity as the official Roman religion, Paganism was outlawed. As Christianity spread, local practices and festivals that were once Pagan were Christianized. So while this allowed folk customs and folk magic to persist, ancient religions as a whole did not survive.

Two – Worship of the Great Mother

The myth of the Great Mother Goddess was reinforced during the feminist movement of the 1970s, but it cannot be proven as archaeological evidence of Pagan religion because prehistoric religion had no written records. It is more likely that people worshipped local goddesses rather than one universal goddess.

Satanism is a religion, however, neither Satanists nor Neo-Pagans actively worship Satan because they don’t believe in him. In their worldview, Satan is considered a Christian construct. Instead, Satanists celebrate the idea of what Satan represents: freedom to do as one pleases with no one to answer to.

The largest of the modern Pagan faiths is Wicca, which is a blend of polytheism and occult practices. Its modern roots lie in folk magic, the European romantic movement of the 1800s, and conception of organized magic. Wicca was formally created by an Englishman named Gerald Gardner in the 1950s. He was credited with adding solstices and equinoxes to the festival calendar, stressing gender equality, and stating that the goddess trinity (maiden, mother, crone) is higher than the Christian trinity (Father, Son, Holy Spirit). Wicca didn’t come to America until the 1960s, but there are now more Wiccan practitioners in the USA than in the rest of the world.

The second most popular is Druidry, which is based on ancient Celtic druidism. This sect is more closely aligned with ancient practices than Wicca. The smallest branch in popularity is Asatru, which is based on the Norse Paganism beliefs of Scandinavia.

Under the larger umbrellas of Wicca, Druidry, and Asatru there are countless other sub-traditions. Since the practice of Paganism is linked to locality and personal practices, there is no uniform belief system that applies to all practitioners.

While the rest of us are celebrating Halloween, Pagans are celebrating Samhein, or the final harvest. It is believed that the veil between the worlds is at its thinnest on Halloween and the spirits are able to pass through the veil. As illustrated in the Disney film Coco, this is when the living contact and honor their ancestors. The Celts believe that Halloween is the day “between days.” It’s also their new year’s eve, so it’s also the day “between years.”

Pagan customs include casting circles (spell-work) before midnight, speaking to the deceased, placing offerings on altars, and divination for the coming year. Carving jack o’ lanterns is a common tradition and a symbol of energy through which spirits are seen. The crone goddess is invited to join the rituals as she symbolizes death and the underworld. Significant herbs used in samhein rituals include belladonna (deadly nightshade), thyme (signifying dead souls), rosemary (for remembrance), and mugwort (second sight).

(In the infamous witches’ scene in Macbeth where they chant the poem “double, double, toil and trouble”, the witches mention the following ingredients, which are actually folk names for common plants: eye of newt = mustard seed; toe of frog = buttercup; wool of bat = holly leaves or moss; tongue of dog = hounds tongue; adder’s fork = adder’s tongue.)

If what I’ve described sounds fairly innocent to you, I’d encourage you to take a deeper dive…if you dare (jk, that was ominous). Unfortunately I cannot do Paganism proper justice in this space, but the more I read the greater respect I developed for Paganism…and I’m not referring to an appreciative respect. I have a healthy respect for the root of all Pagan religions, which is, ultimately, Satan…as in, I wouldn’t touch anything remotely associated with an active Pagan practice with a ten-foot pole. I read a fabulous book that detailed a lady’s experience when she was possessed by her “goddess” and a guy’s experimentation with necromancy. Ain’t nobody got time for that. I know spiritual warfare, angels, and demons can make a lot of people uncomfortable. There was a time when they made me uncomfortable as well. So while I respect the spiritual powers at play in the world (especially around Halloween and other Pagan holidays), I do not fear them, because I know who I am and whose I am. BUT, that doesn’t mean I’m willing to mess around with Paganism either, which leads me to my next observation…

Witchcraft has come disguised into the American wellness movement. As of 2015, there was estimated to be one million people in America practicing some form of Paganism. Internet searches for witch-related paraphernalia went up 30% in two years and purchases on Etsy for witch-related items rose 60%.

Americans have always held interest in witchcraft. It’s an interest that tends to pique during times of war, technological upheaval, and social unrest. Millennials, specifically, seem to be gravitating toward witchcraft not because they are looking for religion, but because they are interested in alternative spiritual practices that can be used as a form of wellness.

In her article “How Goop’s Haters Made Gwyneth Paltrow’s Company Worth $250 Million,” Taffy Brodesser-Akner writes of the 21st century’s love of new-age wellness: “the wellness point of view [has] invaded everything in our lives: Summer-solstice sales are wellness. Yoga in the park is wellness. Yoga at work is wellness. Yoga in Times Square is peak wellness. When people give you namaste hands and bow as a way of saying thank you. The organic produce section of Whole Foods. Whole Foods. Hemp. Oprah. CBD. ‘Body work.’ Reiki.”

Brodesser-Akner writes that, in the face of existential crises, more consumers have turned to new age or spiritual cures for their malaise, creating a culture surrounding a vague sense of “wellness” that really has no consistent identity other than its affiliation with the upper-middle-class. We can see something similar happening with the witchcraft-as-wellness movement: magic becomes a metaphor for young people, a means of attaining that elusive element of control and happiness. “Rather than learning about the history of witchcraft and its relationship to racism, colonialism, and misogyny, millennials are looking at “witch” culture as an opportunity to experiment with aesthetics and try to improve their own lives.”

I’m sure this section can spark a thousand arguments, but I’ll end with this: Let’s be careful what we allow to influence our lives.

By the Pricking of my Thumbs…

So when I say I love Halloween, what I mean is that I love the spirit of the holiday: snuggling with the boys, getting a little spooked by a scary movie or terrific ghost story, drinking apple cider, carving pumpkins, and getting that spine-tingling feeling that something’s watching you from the shadows…

…probably because something is.

I love scaring my friends, I love Harry Potter and all things magical. I enjoy researching and learning about witchcraft and I love the witchy aesthetic that’s trending right now.

But I am wary. I’m cautious in my research because like I said before, I respect spiritual warfare. I respect that the devil has power over the world and there is true evil residing here.

Superstition keeps people in a constant cycle of vendetta and fear, whereas the Bible tells us that vengeance belongs to the Lord. Our strength and power comes from the Lord. He is the one who fights our battles and drives out fear. He is the one who is the very definition of love. The thought I come back to at the end of the day, most days, is that my God has already won. He has already defeated death and darkness. There might be some scary stuff hiding in the shadows, figuratively speaking or not, but my God can handle it.

Thanks for sticking with me through this longer-than-average post.

Have a safe, fun Halloween!

The Black-Hole of the Internet, articles by The New York Times, The Chicago Tribune

The Everything Paganism Book – Selene Silverwind (2011)