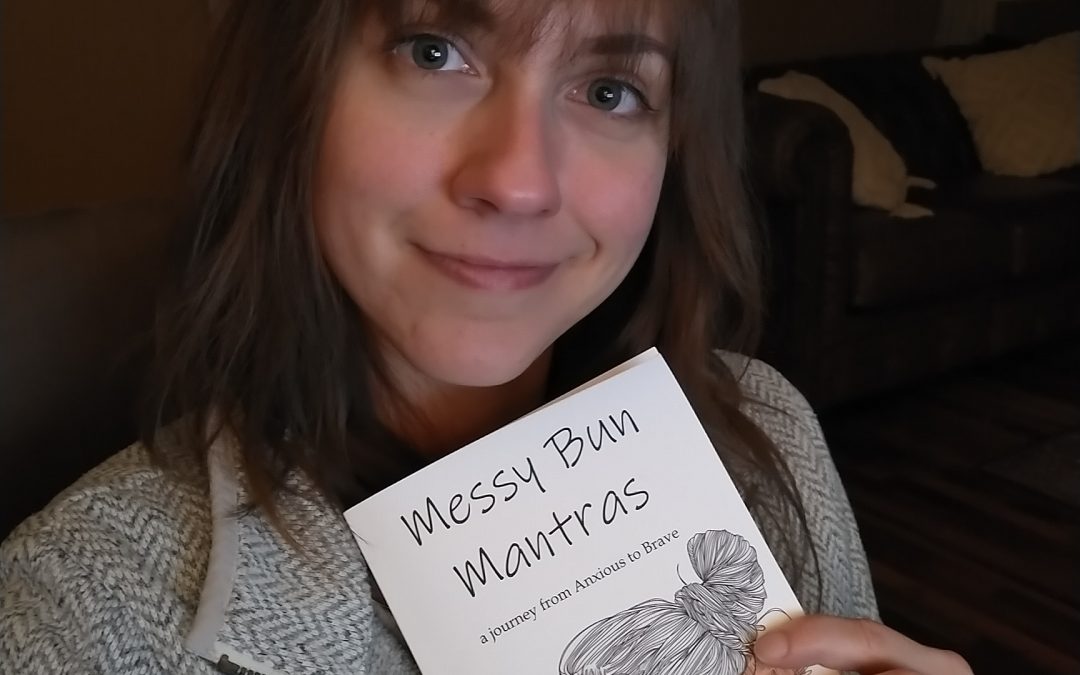 The following is an abridged excerpt from my book, Messy Bun Mantras.

I always assumed that at some distant point in my life I’d feel like I had things under control. I’ve since learned that it’s not about having control so much as it is about accepting who has control.

I have sometimes felt as though the ships of all my possible, alternate life decisions are sailing by. I should have taken more chances, realized my passions earlier, and gotten a better jump on life.

The past few years have been a whirlwind. My husband and I started our family and we both left our office jobs. Jake left to launch a business with his dad. I left to work part-time from home and stay with our boys. I was a new mom, home alone with two boys under two, with a husband who worked long hours, six days a week. When the boys napped, I worked both at my job and on the house. My only free hours were in the evening when the babies went to bed, and sometimes I surrendered my introverted desire for solitary recharging to spend much-needed time with Jake.

It was all too easy for conflicting voices and self-doubt to creep into my mind when I was already operating on near-empty. I should’ve been spending time with God, but I chose other pursuits instead. I started daydreaming about those alternative ships and wondering where I’d be if I had chosen something different. Each represented a different dream and I watched them all sail into the sunset and leave me behind.

The sudden urge to GO took over my soul in a hurricane frenzy. I realized I hadn’t gone anywhere, done anything, or been anyone of any kind of importance or significance and time was running out. I needed to hurry and get to the place where I thought my life should be. I needed to chase freedom and peace. I needed to quickly – overnight even – become everything I expected myself to be, the best version of me. The current version was not Enough.

Grace has always been a hard concept for me. I’m a type-A, Enneagram Four (the Individualist), achievement, and success-based person. It’s difficult to accept that the Creator of the universe loves me Enough to extend grace to me as a gift. How is this possible? I didn’t do anything to earn it, yet nothing I do can make the Lord love me less. While I’m pursuing worth in every single place but Him, He’s patiently waiting for me to receive His love and acceptance. I’ve done such a good job at convincing myself I am not Enough for Him, or myself, or anyone, but what if I am? What if I’m Enough?

What kind of freedom would that belief bring?

If I believed I were Enough, anxiety would have a lesser hold on me. I wouldn’t suffer from as many panic attacks and sleepless nights. I could better handle meeting new people and be vulnerable in a group setting. I could find courage in large social gatherings without feeling like the world might implode.

If I believed I were Enough, I could push on the boundaries of my comfort zone more easily. I could volunteer my skills and my time with the confidence that I am the right woman for the job, just as God made me. I could believe that failure wasn’t definitive and new opportunities were right around the corner, not because I am deserving of special treatment, but because I recognize I am Enough to put myself out there and try.

If I believed I were Enough, I could break free from the weight holding me down. I could ride the storms, I could unfurl the sails, and I could step into the potential that only comes when you give yourself permission to accept freedom.

It is hard to be consciously present. I am always looking ahead, eager to learn, ready to see what else is out there in the world. I’m such a homebody but I have a wild, adventurous soul. It takes effort to pull myself back down to the here and now. I want to know what’s coming beyond the horizon. I struggle with accepting the current season in which I find myself. I’d rather be moving toward a target at light speed than standing still. I value solitude and the peace that accompanies it, but I’m still learning to enjoy being in the moment. I desire to be more than I am, better than I am. If I am not moving forward, then where is the proof that I’m moving at all? Am I, heaven forbid, moving backward?

The word is restlessness. The overwhelming urge to GO stems from not being grounded, from lacking strong roots. It’s bred out of discontentment, feelings of inadequacy, and possibly too many pirate movies (just kidding, there’s no such thing). It comes from not remembering who I am and whose I am. It creates an ache that tells me I’ll never measure up to anything if I simply stand still. I’ll never amount to anything if I am not Enough.

The thing about the overwhelming desire to keep moving is that I’ll never be good Enough by my standard. I’ll never read Enough, experience Enough, pursue Enough. I simply can’t be everything I want to be on my own, nor can I be everything everyone else needs me to be without help.

By accepting that I’ll never be Enough on my own, I open myself up to accept those things I formerly could not: grace and freedom.

It is a beautiful thing to know that I don’t have to be Enough all on my own. My Father promises to be with me through the valleys and the mountains (Psalm 121:1-2). He promises He’ll never leave me (Matthew 28:20). He’ll always remain faithful (Psalm 119:90). I can give my burdens to Him when I can’t carry them anymore and He will give me rest (Matthew 11:28).

What if in that rest, I listened? What if I worked to quiet my anxiety, set realistic goals, accepted grace, and in turn, gave it away? Maybe there’s a reason that God speaks to us in a still, small voice.

In God’s eyes, I am already Enough. He calls me to the altar and meets me there. When I don’t feel like what I have to offer is Enough, He says, “You have done Enough, and I will do the rest.” He will pick up the story from where I left off. He will take care of the things I obediently give back to Him.

Who I am is Enough. What I bring to the table is Enough. It’s not a question of my worth, but my faith. Do I trust God to take what I have, what I am, and multiply it to reach the world for His kingdom? He simply calls me to obedience; He doesn’t call me to solve the world’s problems. He’s already done that. We call it Good Friday. Accepting that I am Enough is an act of surrender. It means I daily and consciously recognize that I don’t have to prove myself to anyone; God has spoken over me.

Believing I am Enough

Believing that I am Enough is about resetting my mentality. It’s giving myself a regular allowance to step back and refocus. It’s purposefully seeking that stillness in which God speaks to me. When my mentality is reset I am confident that I am Enough. I know I don’t have to be everything.

Believing that I am Enough is resting in the knowledge that though imperfection streams through my life, so does God’s grace, and grace is what brings me freedom. Being Enough is accepting that through Jesus’ sacrifice I am not the same person I used to be. He makes me good Enough. He gives me the strength I need to live an abundant, productive, and godly life. Even so, I will still fail. It’s okay, as I’ve made room for failure. I am big Enough to recognize that I can try again tomorrow. If all I can do today is live, but live well and for His glory, that is Enough.

You are Enough. Whatever season you’re in, you are equipped. You are seen. You are not forgotten. If you ask God to meet you where you are, He will.

Say it with me: I am Enough.