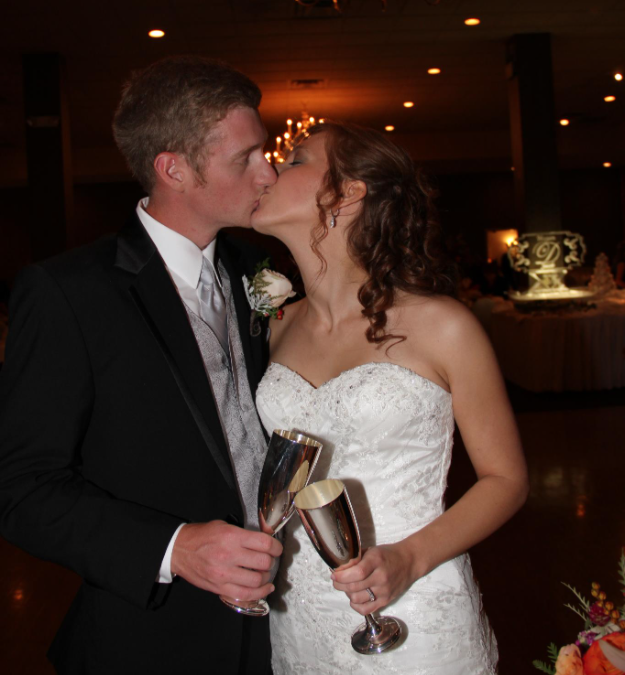 Today is our ninth wedding anniversary. We’re not much for gift giving, but I thought I’d check on what the traditionalists say we should give. According to Hallmark.com, our anniversary themed gifts to each other should be either willow (wicker) or pottery.

Does something from Pottery Barn count?

Just kidding, we went to the same high school. I graduated in 2007. Jake (2004) was home visiting his family for the last remaining weeks of summer vacation before heading back to university in Nashville. I was two weeks away from leaving for my own college in Indiana when, quite randomly, I was called by our mutual friend (also my cousin) and asked if I would say ‘yes’ or ‘no’ if Jake asked me out on a date. I didn’t really think he’d ask, so I said yes.

Well, then he asked.

We dated long-distance for four years while I was in college, during which Jake graduated and moved back home to Cincinnati. We were engaged for a little over a year and then married shortly after my graduation. And as they say, the rest is history.

I did. And this was before smart phones. You know what we did? We handwrote letters and sent cards.

I can’t say I’d recommend long-distance relationships, but it worked for us. We were able to focus on getting to know each other because we had no other option but to talk. We were both able to concentrate on our degrees and have separate lives outside of our relationship. I was able to invest into my friends without splitting time between them and a boyfriend, and those are friendships that still thrive today.

Since we spent so much of our dating history apart from each other, it wasn’t weird for us to slide into marriage with separate lives as well. We did things separately, worked separate schedules, and had separate friend groups. We hosted gatherings as a couple and went on group dates too, but the early years of our marriage were spent largely separate…together.

Evolution of the Dance

In the past few years, however, we’ve grown into more of a partnership. Maybe it’s having kids, maybe it’s getting further in our careers or hitting our thirties, but we’ve matured, grown closer to each other, and are closer to realizing our mutual goals. We’re no longer autonomous, which was something I held onto for a very long time. I wanted an identity outside of my marriage and my family, but I’ve learned to relish a multifaceted identity. I’m not just wife, mom, writer, pirate, or woman. I am all of the above. I am a little messy, but hey, who isn’t?

I can’t place a finger on the exact date of this relational shift, but I strongly suspect it’s when we started getting more involved at church and in our individual relationships with God. I’ve prayed for a strong, godly husband and marriage for most of my life, and I can see those prayers come to fruition. I’ve prayed over my own heart and desires, and I’ve felt God move within my mind and my spirit, allowing me to feel peace and contentment about the life Jake and I have built. The older I get, the more I see that it really is the little things in life. It’s not the home, it’s the people within. It’s not the job, it’s the opportunity to provide for your family. It’s not the late nights with a sick child or new baby, it’s the blessing of being called “parent.” It’s not the inconvenience of a busier social schedule, it’s the privilege of living in a country where we can worship God and meet openly with other Christians. It’s the gift of being married to a spouse who puts God first and leads his family.

It’s letting go of the things that could have been because what’s right in front of me is all I’ve ever needed.

All that to say: happy anniversary, Jake.